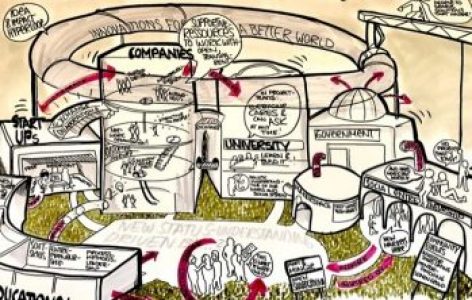 At the FLI Conference 2018, we asked representatives of the corporate, startup, academic and social business world how to leverage cross-sectorial collaborations for co-creating the innovation ecosystem of the future.

How do you break silos between the private, public and social sector? It is difficult enough to break silos within a company alreadyso fostering cross-sectorial collaboration for creating the innovation ecosystem of the future seems impossible. There are some attempts, but these are difficult to sustain.

Take for instance the fashionable collaborations between large corporations and startups: How effective is it to send business executives to Silicon Valley tours and Design Thinking workshops, when they struggle to incorporate the new insights in their company? Way too often, “the corporate immune system strikes back”, to phrase the author of “Exponential Organizations” Salim Ismail. Indeed, embedding new approaches into a company’s DNA is particularly difficult, as the culture of a company often difficultly allows radical changes.

Four panelists of our FLI Conference 2018 on “The Truth Behind Innovation”, all from different sectors, explored how different players collaborate together today, and how effective ways of collaboration could look in the future. 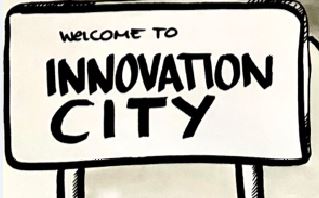 The idea of the FLI panel discussion was to imagine how an ecosystem of thriving innovation and collaboration initiatives can look like, and how all stakeholders from various sectors can contribute to it. So how can an Innovation City, as an exemplary future innovation ecosystem look like? What are the players and ingredients necessary for building the future Innovation City?

Each panelist, representing respectively the corporate, startup, academic and social business world, had a unique viewpoint to share, but still agreed on several aspects. Johann Romefort, entrepreneur who left the formerly “boring” Paris to live seven years in Silicon Valley, revealed that one of the major success factors of this highly innovative ecosystem is the unique density of its network, where cross-sectorial collaborations is embedded in its DNA. And that is because there is a strong mentality of support and mutual help, characterized by a “pay it forward” attitude instead of transactional thinking.

He observed a great willingness to share information & knowledge, and to mentor others- based on the credo “the more you share, the most you get in return”. Gabriele Semino, leader of a student team from TUM which developed prototypes for a hyper-speed train and won Elon Musk’s competitions twice, agreed that a network community is paramount. The engineering student stated that the project of his team only succeeded thanks to such a connector and catalyzer, namely UnternehmerTUM:

Our project only works because at Technical University of Munich there is an organization called UnternehmerTUM, which is working towards building a community”

UnternehmerTUM provided a space for the ambitious students to create their prototype of the high-speed train (the MakerSpace at TUM), helped them connect with companies that would sponsor them, and enabled them to get access to intellectual capital.

Realizing a mindset shift through a new education

How can we get more of these people and organizations willing to push for greater collaborations, and contributing to a dynamism of mutual exchange and support?

All panelist agreed that what we essentially need is a mindset shift. While several resources are of course also needed for building a striving ecosystem, such as money, people, and networks, it is the mentality that is the biggest resources of all. That has been especially highlighted by Konstanze Frischen, leading the social entrepreneurship network Ashoka in North America. In her organization, the credo is that “everyone’s a changemaker” – meaning, everyone has the power to take things in its own hand, and to catalyze change. However, we are not there yet. And that is ultimately because we simply don’t believe that we can be changemakers. A radical change in mentality is needed. According to her, we are still stuck in an “old industrial model”, where we have been taught to think and act like assembly workers, with an archaic education system relying on frontal lessons and learning by heart. But this is absolutely out-dated. Instead, she envisions an educational system that reflects the reality of the 21st, and fosters the skills of the future, which even technological advancements (such as artificial intelligence) will not be able to replace us in, such as creativity, initiative-taking, collaboration, empathy and communication. 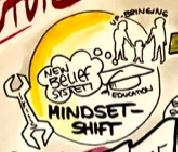 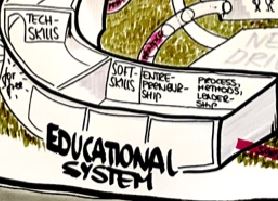 Gerhard Hastreiter, former consultant of the insurance giant Allianz, strongly agreed with Frischen’s statements. We need more people “building playgrounds”, but unfortunately there are not a lot, as we have not been educated to experiment and be creative. In fact, we were more educated to value status over ideas. We should overcome our whole thinking in hierarchy. In his eyes, we slowly but steadily experience a paradigm shift, but we still have to undergo a mentality shift, and especially an organizational structure that supports that shift. The organizational structure of the future should be a network of smaller units which have purpose, mastery & autonomy (a concept by Dan Pink). Things are going on in this direction, such as the adoption of holacracy and agility principles by some companies, but there is still much more to go.

Finally, the panelists agreed that we tend to romanticize Silicon Valley. Actually – and this has emerged a lot during the panel discussion- Europe has enormous potential and resources too: we have a better quality of life, social security for everyone, tremendous financial and intellectual capital…the list goes on. And slowly but steadily, strong innovation ecosystems are emerging a bit everywhere, such as in Munich, Paris, Berlin… At the same time, the innovation spirit of Silicon Valley that seemed so ever-lasting seems to falter – in the seven years where Johann Romefort lived there, there has already been quite some changes. He observed how tech giants spread out and took over, how living costs in the San Francisco Area exponentially rose, social tensions exploded…

What finally came out in this panel was that collaboration should not only be strengthened between stakeholders, but also between different ecosystems in Europe. As Johann Romefort put it so rightly:

There is something we don’t necessarily think about is that every city is competing to be the next tech hub, right? But the thing is that we have this chance to be two hours away from another city … The thing is instead of competing each other we should collaborate with each other” 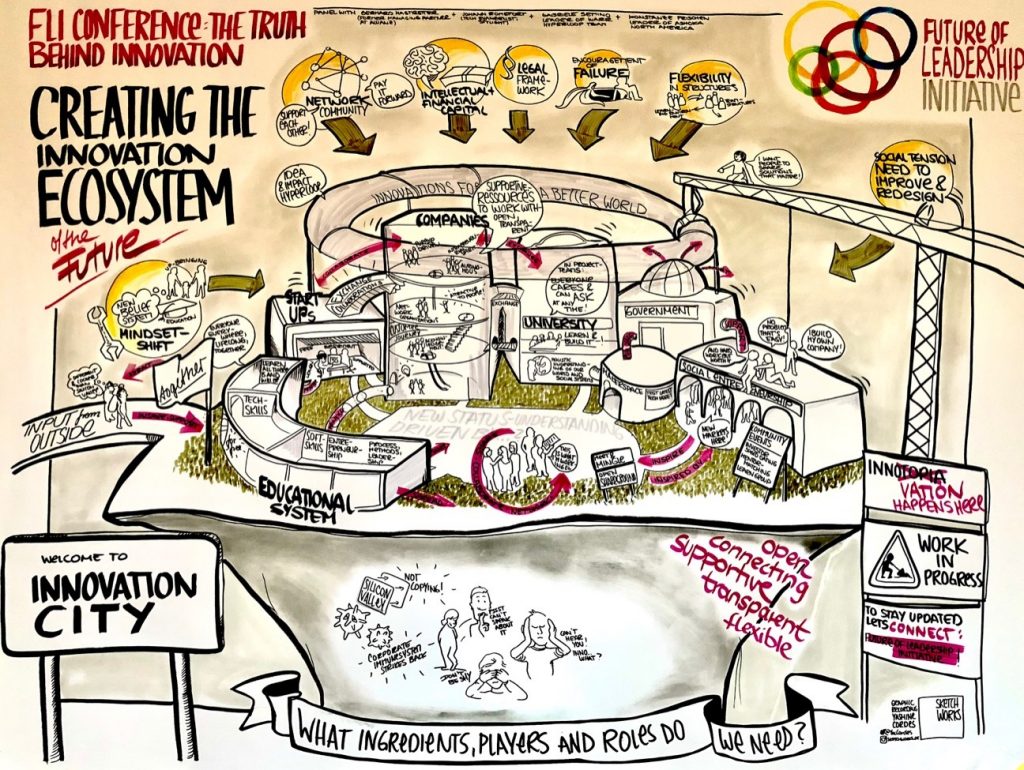 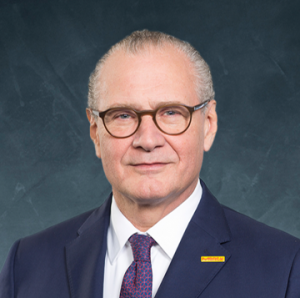 In the twelfth episode of the podcast, the issue of Covid-19 is discussed form the frontline perspective of the pharma industry. Therefore Stefan Oschmann, CEO of MERCK Group, one of the world’s leading science and technology companies is joining Sebastian Morgner. 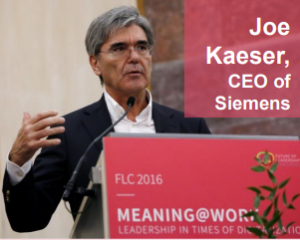 How to give a purpose to your company?

Do you want to make business or great business? At the FLI Conference 2016 Joe Kaeser, CEO of Siemens, revealed four steps for meaningful business.